Every now and then I treat myself and go to Marks and Sparks' and drool over the food. And 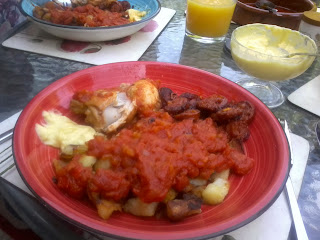 I honestly get inspired by their vast range of ready meals! Gasp! Ready meals!? Naughty food blogger! Anyway, last Summer I discovered their Tapas style Marinated Chicken, Potatoes and Alioli and FELL. IN. LOVE. It apparently served two but I, of course, ignored this advice. They had somehow managed to bottle the very essence of a Spanish holiday, mix it with chopped tomatoes and sell it for our consumption. Or maybe it's just smoked paprika. Either way it's proper yum.

Out of interest I had a little look at the ingredients on the side of the box and wrote them down, then decided I would have a go at recreating it. I also added chorizo and it was one of the nicest meals I've had in ages. Now since then I have been back to M&S and, to my dismay, it appeared some MANIAC has discontinued this dish. How lucky am I that I wrote down that ingredients list!? I didn't write down my method though and so last week I muddled through, pen in hand, and wrote it down to bring you this recipe. I highly recommend it, particularly if you're fancying some sort of relaxed summery tapas evening with friends. This would be perfect.

N.B: These pictures are from last year when I first made it, and I had fried the chorizo separately. This recipe includes them in the sauce instead and is how I did it this time. Calm down, everything's going to be alright. You'll get your chorizo. 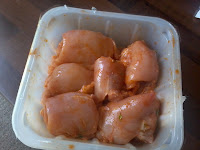 1) Prepare the marinade by lightly roasting the cumin seeds then adding them to the chicken along with the rest of the marinade ingredients. Give em a good squelch together. Go on really get your hands in there. Then cover and leave in the fridge to get all friendly. This should be done a good few hours before if possible. At least an hour if you're in a rush.

2) 40 mins before you want to serve put your chicken and marinade in a casserole dish and wack it in the oven at 180°.

3) 20 mins before feast time get your sauce started by frying the chorizo, garlic and the red peppers. Add chopped tomatoes, oregano and sugar. Bring it to the boil then turn down to a simmer and let it reduce nicely.

4) Lightly roast the fennel seeds then sauté your diced potatoes in olive oil with the smoked paprika, thyme and salt, until they're nice and golden brown. 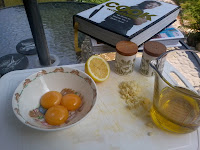 Now the original dish was served with Alioli which took it from mouth watering to concerningly wonderful in one big dollop. The first time I made it I MADE alioli with a HAND WHISK drizzling olive oil drop by minute bloody drop and nearly wanted to die. It was good but just wasn't worth it. This time I just bought some in a tub from Morrisons. Soz.


Eat it outside with a lovely group of friends and family if possible. See that bright stuff in the pictures? That's sunshine that is. It will come soon, I promise. I can feel it in my chorizo. 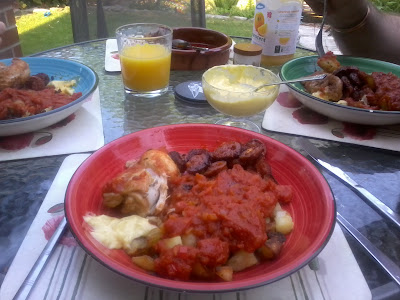