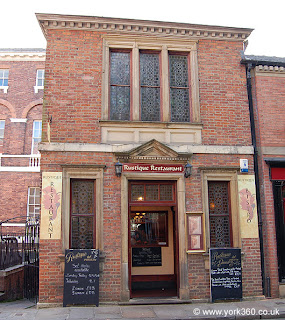 My sister and I visited Rustique during our weekend away in York in February. This was prompted by an earlier conversation when we'd talked about our favourite cuisines. Both of us realised we'd never been to a French restaurant or eaten any authentically French cuisine. This would come as a surprise to those that know me and my love of butter, cream, sauces, rich food, red meat, cheese and the like!

Making a reservation a few days before wasn't as easy as I'd anticipated. Friday night? Nothing. Saturday afternoon? Nada. Saturday evening? Zilch. Oh dear. We ended up with a table for two at 12 o clock on the Sunday we were leaving. It wasn't ideal but I had a feeling it would be worth it. I was right!

The decor was warm and welcoming with lots of French artwork and lovely stained glass windows, one of which we were seated by. Complimentary bread and olives were offered, which I always think is a nice touch, and food came out very promptly. 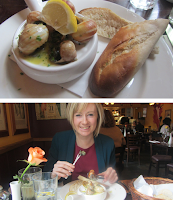 I'd already decided that I would be having the snails, having never had them before. Our server, who was French and may have been the owner, was very helpful; showing me how to use the 'tools' and talking to us about each dish. I really enjoyed the snails and could have eaten a lot more of them. The actual taste is quite delicate, not earthy like I expected, it's more the texture that people enjoy about them. They're almost mushroomy in how they feel in the mouth, and the garlic and parsley butter they are served in is divine, particularly with the bread on offer. I would definitely have them again. 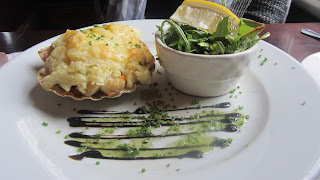 Jo has the Coquilles Saint-Jacques, another classic french dish that neither of us had tried before. It was traditionally served and beautifully cooked; with satisfying cheesy mash atop the hidden gems of juicy scallops in a light white wine and leek sauce. It wasn't a particularly creamy dish as I'd thought, and it all came together very well without being too rich. 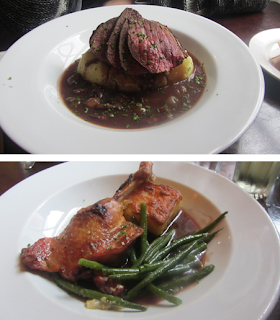 When choosing our mains, Jo couldn't decide between the Venison and the Lamb before eventually ordering the latter. However, due to some error in the kitchen she was given the Venison. She didn't mind at all and was actually really pleased when she tucked in and it turned out to be one of the best meals she'd ever had. The steak was melt in the mouth perfect and complimented by a rich meaty gravy. Our server did walk past a little later, noticed the mistake and was very apologetic. He made sure she was okay with eating venison, which for some reason some people aren't, and told us that he would be reducing our bill. He really didn't have to do this as Jodie was really happy with her meal, but it was a nice gesture nonetheless.

I had the Confit de Canard with dauphinoise potatoes and green beans. The duck fell off the bone after being slow roasted to within an each of its life and the fruity redcurrant jus was a nice balance to the fatty dark meat. The dauphinoise wasn't the overly creamy, probably completely bastardised version of the side dish that I'm used to, and which I probably prefer, but it was authentic and tasty.

I can't remember the total of our bill including drinks, and with the £7 knocked off for the mistake, but we felt it was exceedingly reasonable for the standard of food and service, and left a big tip. I think the French just completely get it right with food. Top quality meat cooked perfectly, indulgent side dishes and sauces, fresh vegetables, and lots of bread and butter to mop it all up with. If that's what you want from a meal then this is the restaurant for you. It's also only a couple of minutes walk from the excellent York Castle museum. We will definitely be returning (but booking well in advance) when we take our Mum to York next month.