Since February when I finished covering a maternity leave in a Reception class, I've been working in the same school's Y6 class part time. This was ideal for me as I desperately wanted to stay at the school and was excited about the challenge this post would bring. It also means that, when I'm not needed for supply on a Monday and Tuesday, I get lovely long weekends to get all my work done and have time for weekday jaunts with sister dearest. Highlights of which include farm shop explorings, trips to Hobbycraft, and museum based fun. I know; we're very cool.


So a couple of Mondays ago us two lady's of leisure were at a loose end and very hungry. We decided to try out a tapas place in Ormskirk I've been past a few times but never been it. I like the look of the dining area which is in sort of a conservatory next to the old brick building, and glances at the menu have intrigued me. It's called O'este and they bill themselves as a 'vibrant yet relaxed take on Mediterranean drinking and dining'.

We examined the menu before we went and drew up a list of our selections (told you we were cool) and were prepared to pay around £35-£40 for the 6 or 7 dishes we'd chosen.

The venue is easy to see and get to on foot, however due to Ormskirk's one way systems we found it hard to get to in the car. We ended up parked in a car park you had to pay for that was a couple of minutes way, because we didn't want to go too far and end up stuck on the one way roads and having to go all the way round. Upon arriving at the restaurant I saw that the car park was very cramped and I'd have probably struggled to get in and out of it anyway.

We were greeted warmly by the waiter at the bar who allowed us to choose our table; we opted for window seats and enjoyed watching the world go by while waiting for our food. It was nicely busy for a weekday with people enjoying leisurely lunches with family and friends; adding to the overall warm and relaxed atmosphere.

When we got the menu's we were very pleasantly surprised to see that they have an offer on on Tuesdays where most of the tapas dishes are 3 for £8.95. I think this is only in the daytime; it's not quite clear on the website, but it was really excellent value; especially when we were willing to part with around 40 quid for our lengthy dinner.

We ordered and our dishes arrived all at the same time. We were a little perturbed by the waitress who put us off ordering an extra dish. We'd ordered 6 off the '3 for £8.95' menu, but fancied an extra dish of scallops while the rest were so cheap. However she said that we already had a lot of food and wouldn't need the extra dish. Now my sister and I may not look it, but we're big eaters and we know what we can manage when we're ravenous. We could definitely have eaten it but hey ho, it's an excuse to go back. 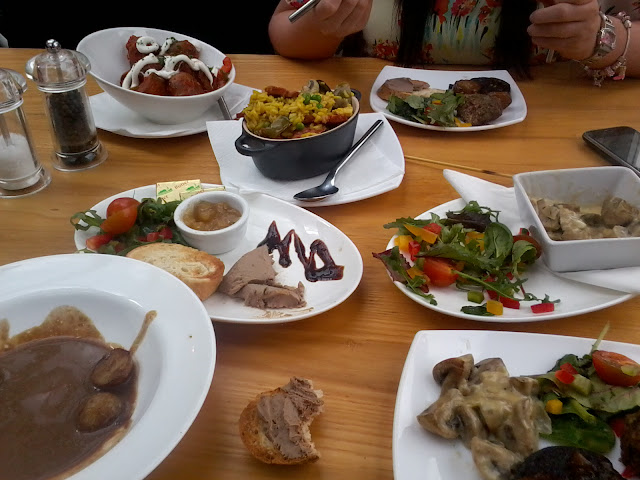 Highlights of the meal included the Paella Mixta which was chock full of vegetables, if not as good as Mother Chipmunks, and the Lancashire Black Pudding with saute potatoes in a mustard sauce. I thought the latter was an odd inclusion on the Mediterranean menu; maybe they're taking inspiration from Corrie's Bistro and their 'Lancashire Tapas' which I thought was genius when Ciaran came up with it. Anyway it was really delicious, especially the earthy sauce.


The Oven Baked Lamb Kebabs turned out to be just one kebab, but this may be because it was on the cheaper menu. It was well seasoned and juicy. The Patatas Bravas weren't traditional, having mushrooms in them and dollops of sour cream on the top. They were nicely spiced though with a lovely deep heat that kept my mouth tingling throughout.
The Chicken Liver Pate was a really nice texture, and the apple chutney complimented it really well. The only real disappointment was their Garlic Mushrooms in a Creamy White Wine Sauce which tasted really bland. However, this was meant to be served with goats cheese but my sister had requested this was omitted. I think the dish would have been much improved by this addition.

When it came to the bill there was another weird exchange with the waitress where she asked if we wanted her to leave us alone as I had my bank card ready on the table. It was a bit uncomfortable, but I do think it was a case of her being a bit harrased and busy rather than genuinely bad customer service.

The whole meal came to £17.90 as we just shared a jug of water to drink. How good value is that? We were really pleased and would definitly go again, as the food was of a good quality. I'd also like to try some of the dishes from the table d'hote menu too, which is also really reasonably priced.
Posted by Chef Chipmunk at 20:22