To Carve or Not to Carve? - Fiveways, Ormskirk

Let's face it the majority of carveries are a bit pants really aren't they, bless 'em. Ridiculously low prices, dry meat and unimaginative vegetables are often par for the course. That's why I was very apprehensive when Gav (the fella) first suggested we eat at The Fiveways in Ormskirk as they did a good carvery. 'A good carvery?' I echoed. But I gave it a go and I'm so glad I did.

The main thing you notice about this place is their dedication to providing food that has been assured to Red Tractor Standards, whose logo can be found scattered all over their menu. This indicates the ingredients have come from farms with high standards of food safety, hygiene, animal welfare and environmental protection. Good to know.


The first time I went I had the carvery and was really impressed. The meat (I chose beef) was juicy and tasty, there was a selection of different types of potatoes, and the Yorkshire puddings were as big as my head. The vegetables aren't the usual carvery fare either, the carrots are sweet and look as though they've just been pulled out the ground, there's also rare treats such as roast parsnips and creamed leeks on offer. The next two times I visited I enjoyed the 'Pie of the Day'. Yes, they have a 'Pie of the Day'; a sure fire way to win over this Wigan lass. I think this is an excellent way to use up the carvery ingredients that, in many other establishments, would have been left on the hot plate until rendered inedible. With this option you can still choose from the carvery vegetables to accompany your pastry topped treat. I didn't take pictures of the meals from these visits, I'm afraid. Carvery mentality took hold and my mountains of mash and leeks did not make for pleasant viewing. Oh the shame.


On my birthday Gav and I decided to share this restaurant with my mum, sister and her fella. I veered away from the carvery fun and chose from the main menu. 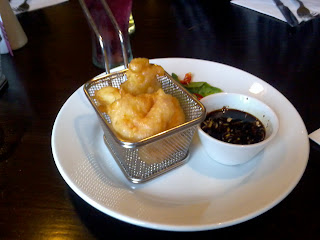 I went for the 'Ginger, garlic and coconut tempura battered black tiger prawns' to start. They were served in a mini fryer basket which I liked, although some may view it as a bit gimmicky. The prawns were nice and big, in a light tasty batter, although I didn't really detect the ginger and coconut that was advertised. I'm not very keen on soy sauce dips as it's too strong a taste for me, but a little bit of it was nice. I also asked for some garlic dip which was brought over without a fuss and was scrummy. There was a nondescript salad accompaniment that isn't really worth mentioning and was the only real downfall of the dish. 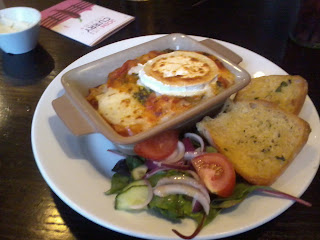 For my main I ordered the 'Spinach, butternut squash and goats cheese lasagne'. It's very unusual of me to order something vegetarian but the combination of spinach and butternut squash is something I often really enjoy in a curry and I felt the strong goats cheese would make up for the lack of meat. I was right and the cheese was very tasty, the lasagne filling was sweet and tomatoey but a little under seasoned. The salad was again okay, but the garlic bread was chewy and not very garlicky!
All in all an average meal with some real highlights. It wont put me off ordering from the main menu again as I've seen some offerings that look really exciting, and I know they've sourced the ingredients to back it up. I can also unreservedly recommend the carvery and pies on offer, and I've also visited the pub side of the building which offers 3D TV (whatever next!) and drinks in a pleasant ambiance.

Please note: ignore the terrible online reviews as they're from a couple of years ago before the Fiveways was taken over. It used to be a Wacky Warehouse style place, it would seem!
Posted by Chef Chipmunk at 21:51