Avocado is something that I've never really had but always fancied. I knew I'd love its creamy texture and the recipes I've seen it in always use ingrediants that really appeal to me; prawns, fresh salsa's, interesting salads, scallops. I often saw it used on the wonderful bitchin' camero blog along with unfamiliar American ingrediants, but then I found a recipe that used it in a sandwich and thought I'd give that a try.

It didn't go too well. I chucked a couple of avocados in my mum's tesco trolley and the next day cut one open for a suppertime snack. I was so disappointed! The insides were bruised and brown, and one half had to be thrown in the bin after my attempts to cut it resulted in an unappetizing mush. I managed to slice the other half and threw it on a sandwich with mayonnaise, turkey and some nice fresh tomatoes, but it just wasn't what I expected. The texture was very slimy and it didn't add much to the sandwich in the way of taste. 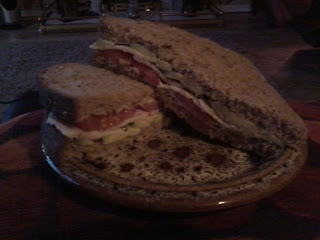 I had to throw the other fruit in the bin as I knew it wouldn't keep, and since this experiment I've bought another one from Morrisons and had the same issues. Both times I'd chosen fruit that was well within its sell by date, they just always seem to be terribly overripe. 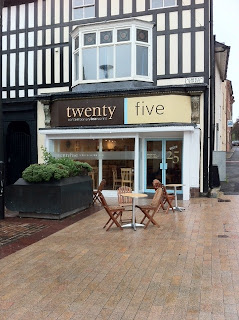 After these two disasters I'd all but given up on avocados and stopped seeking out recipes that I'd never be able to do justice to. Until one glorious Saturday when I discovered a little gem of a tea room in the centre of Ormskirk. I'm so pleased with this find and I can find nothing about it online so you heard it here first people; get to twenty five's at the bottom of Aughton Street.
(This gloomy picture was taken when I walked past today, and it was all rainy.)

Until very recently it used to be a clothes shop called Fever, now it's a little cafe with comfy couches, outside seating, nice nick-nacks, and a small but perfectly formed menu. There's breakfast items available, exciting butties and a couple of small hot meals. They also do high teas on the little stands with selections of cakes and sandwiches, oh how I wish I drank tea! I decided to try the prawn, avocado and marie rose on brown bread, and was presented with this whopper of a sarnie: 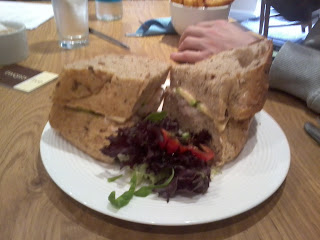 It was dead DEAD yummy. The filling was plentiful and very tasty, although it was quite a challenge to eat because of the impressive doorstop bread. The salad ingredients weren't very imaginative but was dressed in balsamic, which complimented the fresh nature of the sandwich beautifully. And the avocado! It was creamy but still had a bite to it, which was definitley missing in the ones I'd bought. I really recommend this place as the prices are low and you get value for money in a relaxed atmosphere. They also sell cordials, teas, chutneys and other little treats. I bought a bottle of traditional lemonade for my mum which was gorgeous.
So, where am I going wrong? Clearly fresh tasty avocados are available somewhere. Is it because I'm buying them from a supermarket? Would I have more luck at a market? Is there a better time of year to buy them? Where do you source your lovely fresh avocados? And do you have any recipes you'd like to share? Feel free to comment with links and ideas!
Posted by Chef Chipmunk at 17:33