A Tale of Two Butties 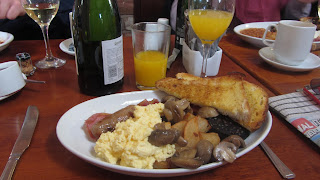 I've been frequenting the quaint old village of Rufford for a few years now and have said many times 'We really should go and have some food outside at the Marina when it's nice one  day.' However, nice days are few and far between and we've never managed to get round to it until a few weeks ago. We were going to the Grand National and it's tradition to enjoy a champagne breakfast beforehand so our friends booked us all in for a table of 10 very smartly dressed giddy kippers.

I had the smaller breakfast, no beans, scrambled eggs and extra mushrooms (courtesy of friends that didn't want the poor things), There was sauteed potatoes hidden on there  too, along with black pudding and the usual bacon and sausage. We were permitted to bring our own champagne and I ordered fresh orange to add to make Bucks Fizz. Overall it was a decent breakfast; the meat was good quality and the vegetables tasty, the eggs seemed microwaved and weren't great - certainly not Moose standard. The service, atmosphere and setting were top notch and I was looking forward to going again and eating al fresco on a sunny day next to the canal.

However, my next visit was not as successful. We got the sitting outside box ticked but arrived at 11.45, missing the breakfast we were hankering after by minutes. I decided to go for a BLT sandwich which is the next best thing in my books. This is what showed up; 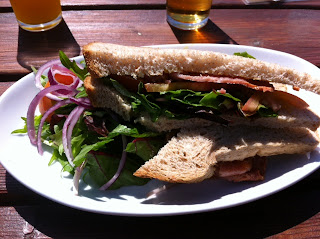 It wasn't good. For a start it wasn't a tripler. Then the fillings were all either sparse or terribly misjudged. There was one small slice of bacon on each half, not enough to fully fill the sandwich. This is probably a good thing seeing as it was cold, chewy and tasteless. It could possibly have been precooked and microwaved for people that miss breakfast. There were perhaps two thin slices of insipid tomatoes, and then the worst crime of all; prebagged salad leaves. AAARGH. For me, a BLT should be stuffed with fresh crisp iceberg lettuce. I know it's not the most fashionable leaf, but it works here. I don't want bitter purple crap and stringy rocket and watercress that's mostly stalk and no leaf. Get it away from  my sandwich, there's enough of it garnishing the bloody plate in the first place. The bread wasn't toasted so the whole thing fell apart on eating and there was NO. MAYO. This was brought over when asked to be fair, but still. Let me have my moment of drama.

A club sandwich shaped void had now opened up in my life and I needed to fill this with a properly made version that only I could do justice to. So here it is; the best club sandwich ever made™.

I know; it's a beaut ain't it? You've got a peek into the construction process too, you lucky things!

1) If you want to recreate this masterpiece (serves 2) you need to slice up a whole avocado and 3 tomatoes to make sure you have enough coverage and some to snack on when waiting for your bacon to cook. Get some chicken breast slices sorted too.

2) Put as much bacon as you can fit under your grill on a high heat (about 6-8 rashers) and don't even think about trimming that fat off.

3) Get six slices of bread and put four in your toaster ready. The other two slices can be toasted under the grill. This is assuming that, like me, you can only fit 4 slices in your toaster. After your bacon's been on a few minutes, put your toast on.

4) When everything's ready, quickly assemble. Slather mayonnaise over everything getting right into the corners. Then two slices of bread should be covered with the chicken and avocado slices, whilst the other two with at least three slices of bacon and 5/6 of tomato. CRAM IT ALL IN.

5) The chicken slice goes on the bottom, the bacon next and the empty slice on top. Cut in half and devour.

6) GET CRUMBS EVERYWHAAAR.
Posted by Chef Chipmunk at 20:21