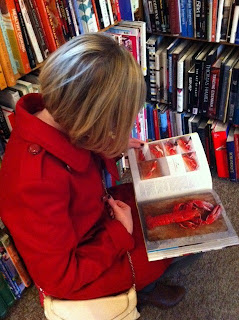 When in Chester recently, we decided to walk all around the city walls. On our way round we came across a treasure trove of second hand books; Bluecoats Book Shop. Gav lost me among the shelves and eventually found me huddled over in the cookery section, of course. It was a thick yellow book on Italian cuisine that had caught my eye and as I flicked through the beautiful pictures I knew I was going to buy it. It's called Cook Italy and is by Katie Caldesi; English born and married to a Tuscan chef. They own a restaurant and cookery school and I'm not in the slightest bit jealous.

Now this book is the American edition of  The Italian Cookery Course. I didn't realise this at the time but at £13 I was hardly going to be picky. However this means American measurements/spellings/ingredients so I would recommend you buy the English version if possible. I managed fine as I have a nifty little conversion cup thingy and I can handle translating egg-plant to aubergine without feeling the need to rage about it in a review on Amazon.

Throughout the rest of the weekend I was engrossed by this book. It was such an interesting read as well providing enticing recipes. It gave me a real feel for the role food plays in Italy and was full of little anecdotes and insights that gave the book it's own unique character. I read the entire thing from cover to cover and decided that the only thing I could possibly do next was to plan and create a FIVE COURSE ITALIAN FEAST. I said this phrase so many times over the following week I am ASTONISHED it didn't trend. So I planned and planned and planned and one wintery Sunday, I finally did it. What a better way to review an Italian cook book then?

So. I shortlisted and shortlisted until I came up with my menu; an Antipasti course, a pasta course, a fish course, a meat course (with a veg side) and a dessert. This pretty much reflects how the book is organised. I wrote out all the ingredients and recipes on the computer so that I could colour code them and print them out (saving me flicking from page to page). I then wrote a chronological colour coded to do list to coincide with the recipes. However, disaster struck when I couldn't get my printer to work. Gav to the rescue who sat and wrote out all my recipes by hand. What a hero. FIVE COURSE ITALIAN FEAST back on. 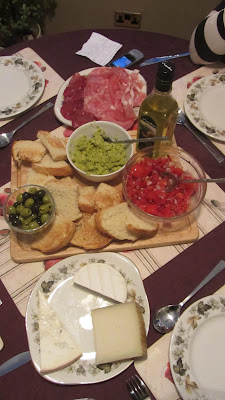 The antipasti course was made up of a couple of ideas from the book. This involved salumi; a selection of cold meats which Lidl came up trumps for, I recognised lots of what they had in store from the book. Formaggi included Gorganzola and Manchego. Yes, I know the latter is Spanish but I was limited by where I could shop ok? My olives were not stoned as I don't have a fancy de-stoner, get over it and buy me one for Christmas yea? We also had pane (lightly toasted) and olive oil. The night before THE FEAST I made salsa di pomodori (tomato salsa, similar to what you'd find on a bruschetta) and pure di fave which was a broad bean and pecorino dip. The dip was a big favourite and one of those things that you think Wow, I've never tried this flavour before in my whole life. All this time something I really like has been out there waiting for me to try. This makes me so excited for all the other things out there I haven't tried yet which could potentially be my favourite food! 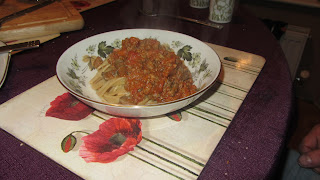 For my pasta course I went for the ragù alla bolognese. The recipe included milk, chicken livers and bacon and sounded rather intriguing and decadent. I'd heard many a time and also read on Mr Food Urchin's hilarious blog that a good ragu needs to be made the night before. This allows the ingredients time to mingle and flirt and become extra tasty. So again, the night before I made the ragu (apart from the milk which was added during the reheating the next day). This was so so meaty! The liver added an extra dimension of texture and elevated this to so much more than your typical bolognese. The milk also gave it a slightly creamy luxurious edge that I would never expect from this dish. Definitely one to make again. 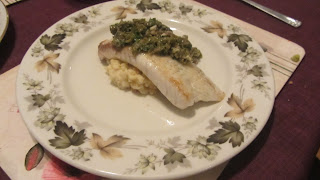 For our fish (pesce) course we had filetto di branzino con pure di cannellini e salsa verde or fillet of seabass with a canellini bean puree and salsa verde. I replaced the fish with tilapia, which I've had before and whose mild taste I knew would be a good partner to the bolshy salsa. I recommend this fish as readily available, sustainable and easy to incorporate into many dishes. The puree was a tasty alternative to mash, and the salsa verde gave the dish a much needed lift. In laymans terms, I would describe it as a tartare sauce without the mayonnaise. It's tart, rustic and very fresh, and is a great side to grilled or roasted meat and fish. 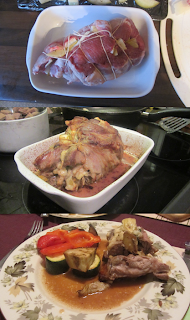 I had warned the family not to eat today but they hadn't listened and by now they were getting a little full. I hadn't eaten and was fine, but still we only had a small portion of our meat (carne) course of rotola di agnello con pecorino, menta e carfiofi served with insalata di verdure grigliate. This translates as rolled shoulder of lamb stuffed with pecorino cheese, artichokes and mint, served with a roasted vegetable salad. This was dead easy to do; just truss it up and shove it in. The pecorino was hard to find around here, I tried 4 places before I found some in Morrisons. The mint gave it a bit of a green tinge but we coped. The meat (from Chadwicks) was beautiful and the stuffing was another eye opening new taste experience. The veg was what it was, but the juices from the lamb took it up a notch. 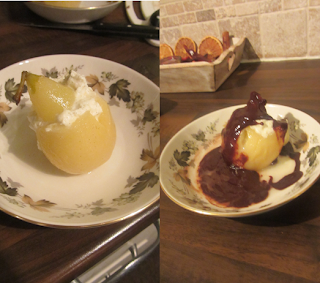 For dessert I had chosen pere cotte ripiene di crema di ricotta all’arancia con salsa di cioccolato. Or poached pear stuffed with ricotta cream and orange with chocolate sauce. I love pears and have always fancied them poached. As you may know I don't believe in desserts unless they involve chocolate and this rich sauce was a great balance to the refreshing pear. The syrup that the pear had been cooked in did cause the sauce to go slightly seperatey and gelatinus, but all in all this wasn't a pretty dish anyway. The family loved it though and it was very different from what we would usually have.


So, as you have seen, I had a lot of fun with this book. I can't wait to explore it further. I loved spending the evening and the whole next day cooking and getting things together, and it was actually easier than most of the three coursers I've done before. I think this demonstrates that the Italian's seem to just know that less is more. They know the little that you need to do to well matched ingredients for maximum impact. This massively inspiring book has taught me a lot already and I can't recommend it enough. This is just the tip of the iceberg recipe-wise; it's rammed with over 400 of them with huge full colour photos. If you're interested in Italian cookery and learning more about the culture that surrounds it, look no further!
Posted by Chef Chipmunk at 20:21