Anyone see Harry Hill on Saturday Kitchen the other week? My favourite programme, along with my embarrassing celebrity crush, and the late great Keith Floyd on particularly hilarious top form, meant I was in heaven that morning. When it goes off there's usually a little chaser in the form of another half hour cookery programme, and this week it was Lorraine Pascale's 'Home Cooking Made Easy'. I've never bothered with her before as she only did a baking programme, which I'm not interested in, but this series looked promising. She was focusing on simple recipes for entertaining guests and everything she made looked like something I wanted to try; I was starving by the end!

I decided to try her mini beef wellingtons. I've had similar before when Gav made me individual beef wellington for the first meal he ever cooked me (he used shop bought pate though, the cheat =P). I also decided to set myself a little challenge and try not to buy any of the ingredients from supermarkets (I definitely just wanted an excuse to mooch around the local farm shops all Sunday). 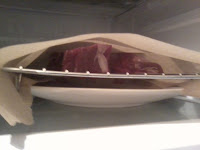 First up was The Home Farm Shop on Maltkiln Lane next to the Eagle & Child. It's your usual modern day farm shop; converted barn, vintagey 'rustic' interior, crafty homemade looking gifts and the like. There was rather a large selection of wine and liquor for anyone who's into that kind of thing; I'm not. I managed to procure the dried mushrooms and the fillet steak. I could have also got the sherry if I was adding it. The meat counter was well stocked and also included some homemade dishes you could buy by the portion; that day they had beef strogonoff and meatballs in tomato sauce. Really nice idea and I may have to go back for a sample some day. The butcher was knowledgeable and gave me advice on how to store the meat as I was only cooking two days later. He suggested I place them on a wire rack with a plate underneath (as shown in the picture) to avoid them sitting in their own juices. They did go a little bit dry in patches but this didn't seem to affect their flavour. I paid £18 for the 4 pieces of 6oz steak.

I also got myself a nice dinner for work the next day; some homemade tomato soup. It was very tasty, but after eating I noticed the use by date was two days previously. I was a little disappointed as you'd expect ultimate freshness from farm shops! 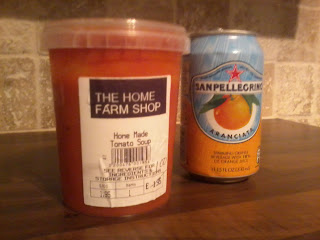 Next stop was the Owd Barn Farm Shop & Butchers at Spencers Farm on Rufford Road. This shop was a lot more old school with plain decor, deep chest fridges and a sales assistant wrapped up in a scarf, hat and gloves. They did also have an upstairs room hidden away packed with all the usual chintsy patchwork and cake stands. My hunt for ingredients was a little more successful here and I bought the shallots, thyme, chestnut mushrooms, eggs and cream.

I did have to go to Tesco for the puff pastry, but I could have made this myself with ingredients from the farm shopa. All in all I really enjoyed shopping in this way; obviously it felt good to buy fresh and local, and it also made the trip more exciting, a bit like a treasure hunt!

So, armed with my finds I set about this recipe (I missed out the sherry as we're not big drinkers so buying a bottle would have been a waste).

1) Roll the puff pastry out on a floured work surface to a 5mm/¼in thickness. Trim the pastry into a 36cm/14in square. Then cut into four smaller squares and place onto two baking trays. Chill in the fridge for five minutes.
2) Rinse the dried mushrooms in cold water, then put them into a bowl and cover with hot water. Leave to soak for 20 minutes.
3) Meanwhile, heat the oil in a frying pan until very hot. Season the beef well all over with salt and freshly ground black pepper. Fry for one minute on each side. Remove from the pan and set aside.
4) Place the shallots into the pan and fry for 4-5 minutes or until softened. Add the butter and chestnut mushrooms and cook for a few minutes.
5) Meanwhile, drain the dried mushrooms and finely chop, then add them to the pan with the glug of sherry, if using. Increase the heat and cook until most of the sherry has evaporated.
6) Add the thyme, cook for one minute, then remove the pan from the heat and set aside. Season, to taste, with salt and freshly ground black pepper.
7) Preheat the oven to 200C/400F/Gas 6.
8) Remove the pastry from the fridge and place a tablespoon of the mushroom mixture into the middle of each piece of pastry; spread it out to the same size as the beef steak. Top with the steak and brush the edges with the beaten egg. 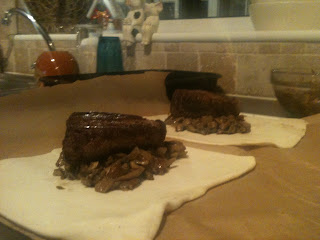 10) Slash the tops of the Wellingtons with a knife and brush them all over with the remaining beaten egg. Bake for 12-14 minutes (for medium-rare), or until cooked to your liking.
11) Five minutes before the Wellingtons are ready, reheat the remaining mushroom mixture. When it is hot, add the double cream and cook on a high heat for 2-3 minutes. Remove the pan from the heat, season, with salt and freshly ground black pepper, then cover with a lid to keep warm.
12) Serve the Wellingtons with a spoonful of the sauce. 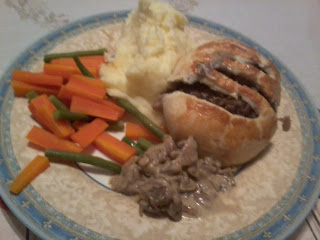 The finished meal was absolutely scrummy! I did have a bit of a stress when I checked the meat and it was a bit too rare for my mum and dad's liking and so my timing went a bit to pot. Otherwise it was very easy to whip up considering how impressive it was. The ingredients really did speak for themselves, and the creamy sauce was really luxurious. My one complaint came from my dad who doesn't trust herbs; he said there was too much thyme. But I reckon he wouldn't even have said if he hadn't noticed me putting it in! The steak from the Home Farm Shop was beautiful and I'll definitly be going back to sample their homemade dishes.

Hope everyone had a lovely, relaxing, food filled Christmas. I did and there'll probably be a bit of a post to follow on it. Happy New Year readers!
Posted by Chef Chipmunk at 21:14