I've been following the Belleau Kitchen blog for a while and liked the idea of the Random Recipe Challenge, but I'm a fairly shy food blogger and hadn't plucked up the courage to put myself 'out there'! I do really need to get myself a proper camera and get into food photography which I think would be a fantastic hobby for me and would definitely improve my posts. For now, I'll stick to my trusty Samsung phone camera and hide my head in shame!

Anyway, for this month's challenge Dom has teamed up with Jac from Tinned Tomatoes (yay, a new blog for me to follow!) to create the 'Random Recipes does No Croutons Required' challenge. And we get to make soup, more yayyy!

The basic idea is to choose a recipe book, turn to a page and random, and you MUST make this recipe. Not quite sure what the consequences are for cheaters, but I assume they are dire! I excitedly turned to my 'New Soup Bible' which I used in my first ever blog post over a year ago! Bless. I had my fingers crossed for a warming thick Autumnal soup when I flicked through and randomly opened it on page 62: Spiced Parsnip Soup with Naan Croutons. Jackpot! And I didn't even cheat! 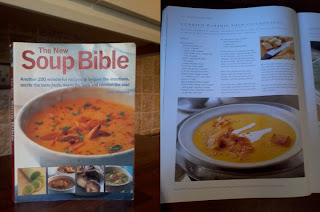 I love parsnips and teaming them with my favourite herb, cumin, was really tempting! I'd probably make a parsnip soup on any old weekend without a fuss, but what a fantastic idea to also add the traditional sides and condiments of a curry. I had a lot of the ingredients to hand, so after a quick scurry to the shops for some parsnips and naan bread I was raring to go. Here's the recipe as it was in the cookbook. 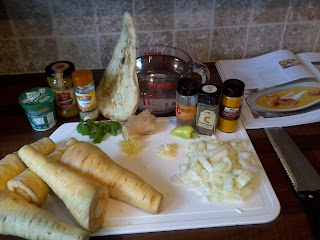 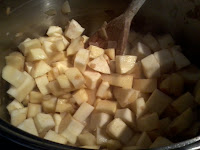 Method:
1. Heat the oil in a large pan and add the onion, garlic, chilli and ginger. Cook for 4-5 minutes, until the onion has softened. Add the parsnips and cook for 2-3 minutes. Sprinkle in the cumin seeds, coriander and turmeric and cook for 1 minute, stirring constantly. 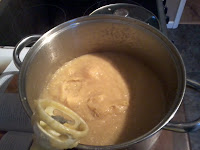 2. Add the chutney and the water. Season well and bring to the boil. Reduce the heat and simmer for 15 minutes, until the parsnips are soft.

3. Cool the soup slightly, then blend until smooth. Stir in the lime juice. (This is where I had to add some extra boiling water as the soup was far too gloopy for my taste, as can be seen in the picture)
4. For the croutons dice the naan, heat the oil in a frying pan and cook until golden all over. Remove from the heat and drain off any excess oil. Add the sesame seeds and return to the heat for 30 seconds, until the seeds are golden.
5. Ladle the soup into bowls. Add a little yogurt and top with mango chutney and naan croutons. 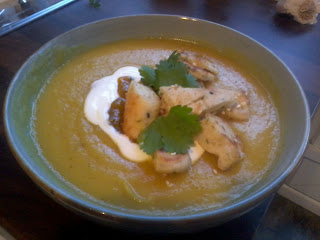 I even presented it all pretty while I'm entering it into a challenge (dead proud ont sly!). I did have a couple of minor disasters throughout the cooking. It was ridiculously gloopy when I blended it, (hard to avoid with parsnip), so I had to add quite a lot of boiling water to loosen it up a bit. I also forgot to add the spices at the correct time! Only realising once the soup was blended and it wasn't the wonderful deep orange colour the book had promised =( I quickly added them in and continued cooking the soup; the colour did become a lot more pleasant but not quite the wonderful Autumn leafy hue I was after.

The soup itself wasn't overly exciting but hit the spot. I went a bit mad with the cumin which although complimented the parsnips really well, did mean the soup didn't really taste of much else. However, what really made this dish was the various toppings; what a revelation! The croutons were tasty little morsels of crunch, the yoghurt added a contrasting creamy taste to the deep earthy spice of the cumin, and the mango chutney really lifted the whole thing to a new level. I'm not usually a massive fan of the stuff and rarely choose it, but its tangy flavour went really well here and I found myself adding a couple more dollops when I ran out! 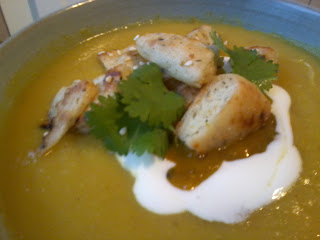 I really enjoyed this challenge; having the dilemma of recipe choosing taken away from me is something I'd like to do more often and will hopefully lead to some exciting new taste experiences that I wouldn't usually do. I think I've started off very safe here but the result was an enjoyable soup that I'd probably make myself, with some finishing touches that transformed it into a meal that I'd even consider swapping my weekly (bi-weekly? tri-weekly??) curry for!