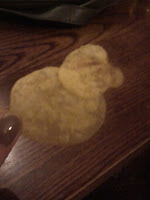 I'd best start this post off by saying I absolutely love Noel Chadwick's. For those who don't know; Chadwicks Ltd are a family business that have been practising as butchers in Standish since 1761. Wonderful stuff, their apparently excessive approach to policing car parking spaces aside. In addition to the abattoir, the emporium compromises a large shop with meat and delicatessen counters. They also sell beverages, seafood and special ranges of locally produced products such as Fiddler's Lancashire crisps (thoroughly recommended! Thick, tasty and exciting; check out my rubber duck shaped one!) I could spend forever simply gazing at the different cuts of meat and almost get annoyed when their attentive staff offer their services, can't they see I'm simply drooling!? There's also a cafe called 1817 in the conservatory at the front, perfectly placed for people watching as you enjoy the fresh produce from next door. 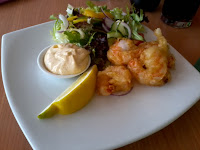 I've visited 1817 numerous times and my only negative has been the odd opening times. They often close pretty early; and are rarely seen with the lights on past 7.30pm, even on Saturdays. The food and service has always been fantastic, with the menu changing regularly and throwing up highlights such as their Cooked Breakfast Salad, mouthwatering Minted Lamb Cutlets, and the best Beer Battered Prawns I have ever tasted.

However, on my last visit I had a real shock with my meal. It was something that I'm sure a lot of people have come across and, like me, aren't quite sure how to handle it. I really didn't like my meal. It was cooked correctly and all the components stated on the menu were present; it was just a truly unpleasant meal. I had ordered the Steak and Mushroom penne pasta in a brandy and cream sauce, and expected something similar to their beef stroganoff which I'd enjoyed on a previous visit. Here is what I received: 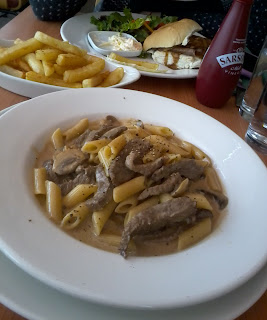 I can't complain about the portion size and the amount of excellent quality beef they provided. However the sauce was like nothing I have ever seen. I am not exaggerating when I say it was the texture of water. It completely ran off the pasta, wasn't appetising at all and was such a let down to the other ingredients. The dish ended up becoming a real struggle to get through. I even asked for a spoon so that I could actually sample the sauce and, while tasting vaguely of brandy, it had no depth of flavour. In the end I gave up and left this pool; not unlike a sorry looking puddle with some morsels of disappointed beef floating around in it. 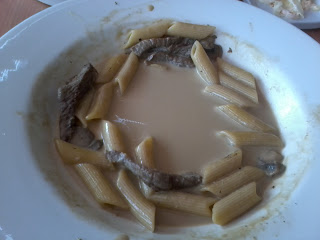 The point of this blog post is for me to question 'What would you do in this situation?'. Am I entitled to complain about a meal that I simply do not want to eat? I've previously sent steaks back for being overcooked as that can quite clearly be seen; it's not too subjective to personal opinion. However, I'm almost inclined to say this dish wasn't cooked correctly, surely the sauce should have been reduced quite substantially? I see this meal on the menu quite a lot and can't believe it would be so popular if this is how it is served. I was so jealous of my sister's hot beef and onion sandwich with crisp salad and creamy coleslaw, and would have been perfectly happy with a replacement meal. I just hate being so disappointed when spending my hard earned cash on dining out.
My big worry is that nothing would come of my complaint. Having worked as a waitress I often found that people would make complaints such as this at the end of the meal when there was nothing that could be done. I would let the chefs know and they'd send their apologies and that was that.
I must stress that having visited this restaurant in the region of 20 times, this is the one and only time I have had a negative experience, and I wouldn't let this review put you off visiting. Have you ever been in a similar situation and complained? Did you get your meal replaced? Or would you just grin and bear it, and perhaps write a disparaging review on your blog ;) Let me know and maybe I'll be more prepared to handle this kind of situation should it arise in future!
Posted by Chef Chipmunk at 20:46